Just added to your cart

To the digital workforce whose chair sucks but can't change.

This seat can help you get through this screw-up.

Dr. Karn, who uses the Enyware seat, says,“Ever since I started using this seat for about 3-4 weeks at work, my back pain has gradually improved. Before, I was sitting in my usual position, which had a flawed posture. But after using this seat, my posture has improved, my sitting position felt more comfortable and longer-lasting without having to put in any effort.”

Dr. Karn is a programmer in a private company who works 8 hours a day and usually finishes at 7:00 PM. These days, he’s working at his company through WFH which seems to be an ongoing arrangement as the company doesn’t seem to have plans for him working there in-office anytime soon. Working at home is a common cause of back pain. The chair he was using was bought from modern trade. Before buying the chair, he felt comfortable sitting on it. So he decided to get it.

But then he found that when he actually tried to sit and work for just one day, he felt pain in his back. He started to slouch more often, unknowingly. Dr. Karn feels if he buys another chair, he’s going to regret replacing this one with a new one, which is still in good condition. He’s also worried about being disappointed by it, and does not have time to go shopping again.

But after sitting with the Enyware seat. A seat that is used to adjust a person’s sitting position and can be used on any chair.

The results seen from day one

“before sitting for 1-2 hours gave me back pain. However,I feel better now from having unbearable pain, to having a slight pain, even though I was sitting for the same amount of time. It might be the seat that alters our sitting position to be fixed to a better posture. There is a cushion against the back and the front shoulders, supporting them in an adequate position for a longer period without having to force yourself to stay in that position for hours. It appears to be better than my previous chair.

Now I’ve been using it every day. The back pain gradually improved and has started to slowly disappear. I used to feel uncomfortable sleeping at night with a backache. But after sitting on this chair consistently, my back pain has started to heal.”

If the chair you sit on doesn't help you get better like what happened to Dr. Karn. We recommend you to use this...

Realigning your posture—into an upright, relaxed and effortlessly balanced sitting posture as you get seated.

Know how you sit. Real time monitor and notification for comprehensive back health preservation. 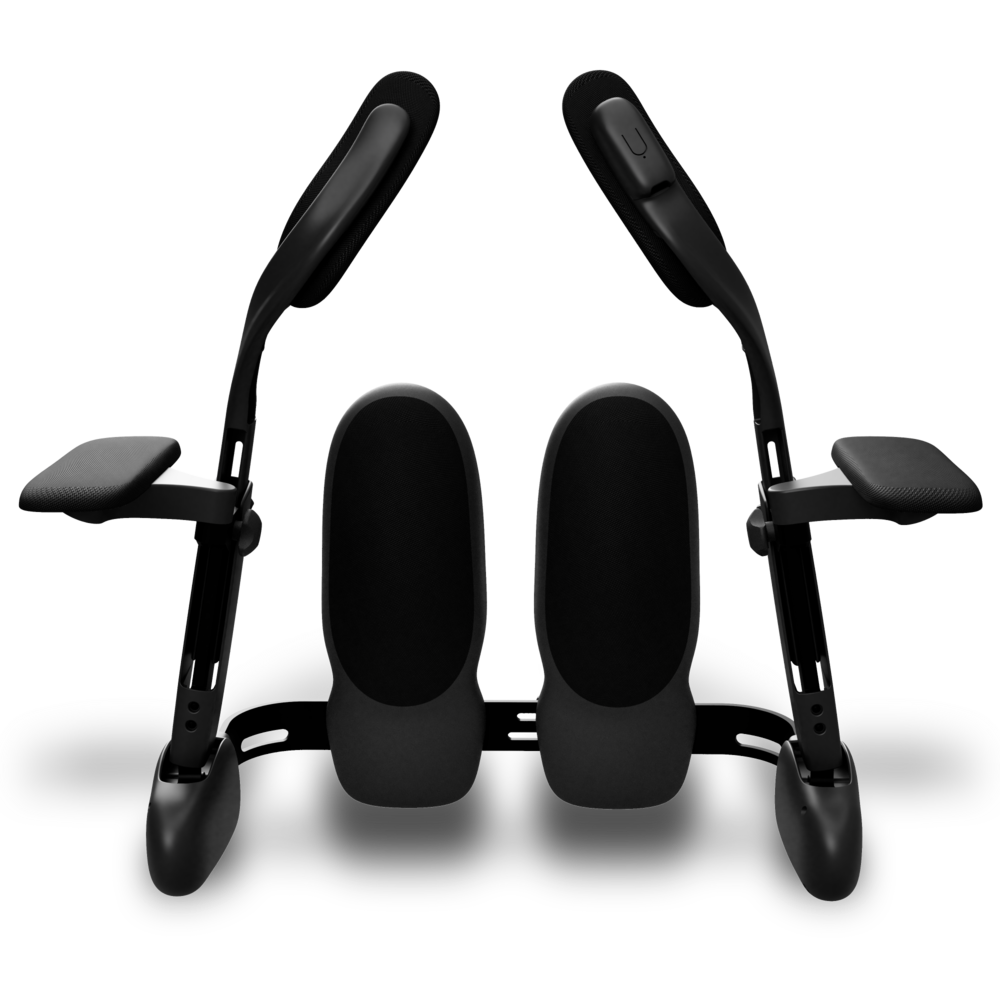 Adjustable To Your Shape

Enyware is adjustable in terms of width, height, and depth to ensure maximum comfort and fit with all body types.

Enyware's components are produced under an ISO 9001 standard. With limited warranty upto 2 years.

The Enyware seat places you in the correct position through the front rod that pushes your shoulders and the cushion that pushes against your back. It is one of the only seats that has a slouch prevention mechanism that comes with a detector that measures time through the seat angle measurement. It sends a notification to your phone, reminding you when you’ve been sitting for too long.

The spine position arranged by Enyware is a natural balance position.

With your shoulders and waist matching, the weight of your upper body shifts down to the sitting bone, which is the natural sitting position, keeping your back muscles from contracting to support your spine and to relax it.

It eases the strained feeling while sitting for long periods of time.

Time Is Your Best Medicine

For your comprehensive back health preservation, Enyware comes with a sensor that measures your seating duration, reminding you to get up consistently after working for long hours at a time.

Even machines still have to cool down after working for a long time. And since your body is more important than machines, it deserves better treatment.

Enyware is a chair accessory for you to practice your sitting posture whether at home or at work.

Use just one cable for installation within 30 seconds.

An adjustable width and height to suit your body type. 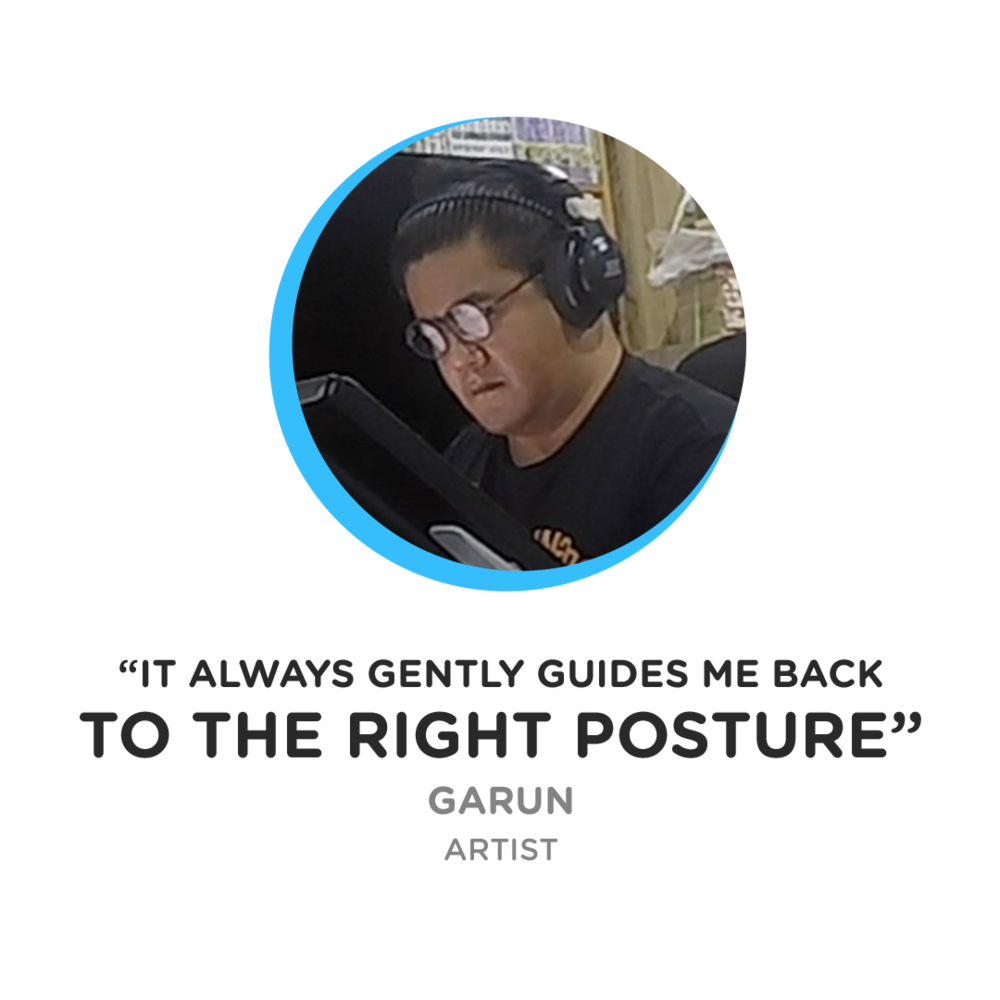 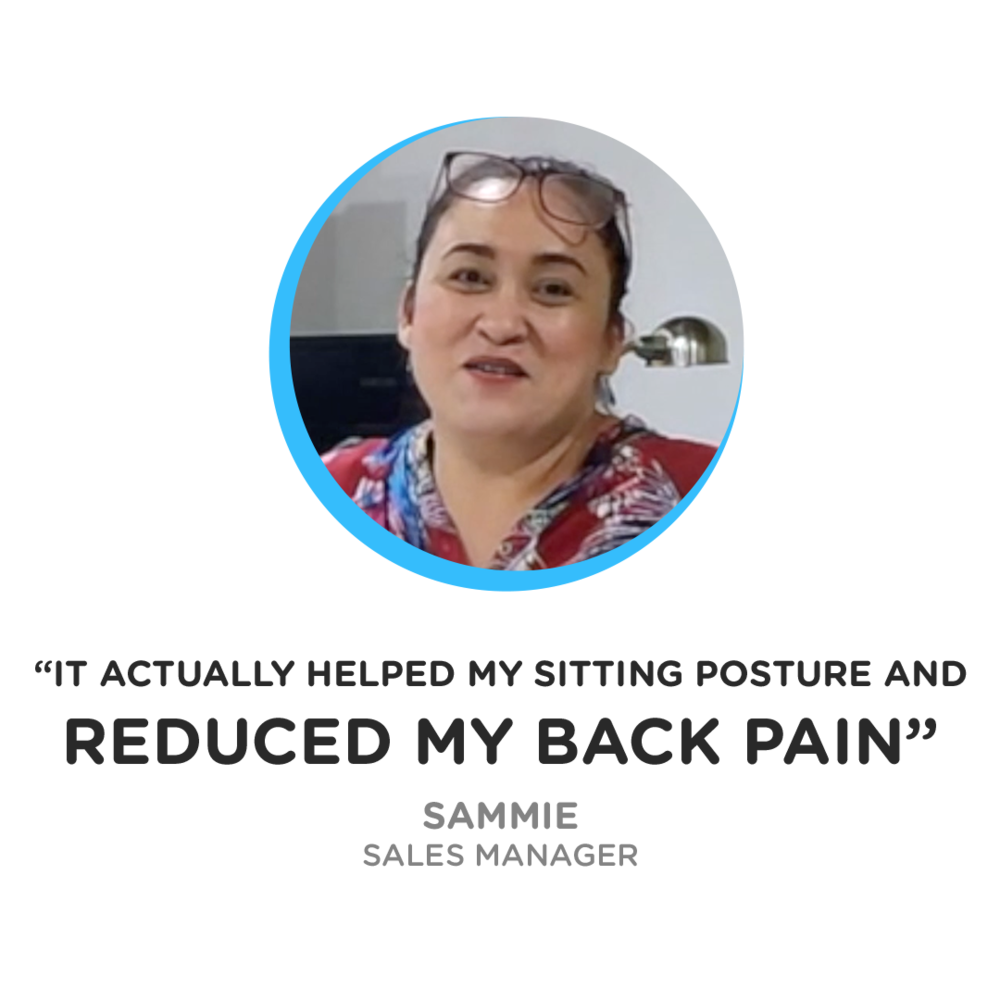 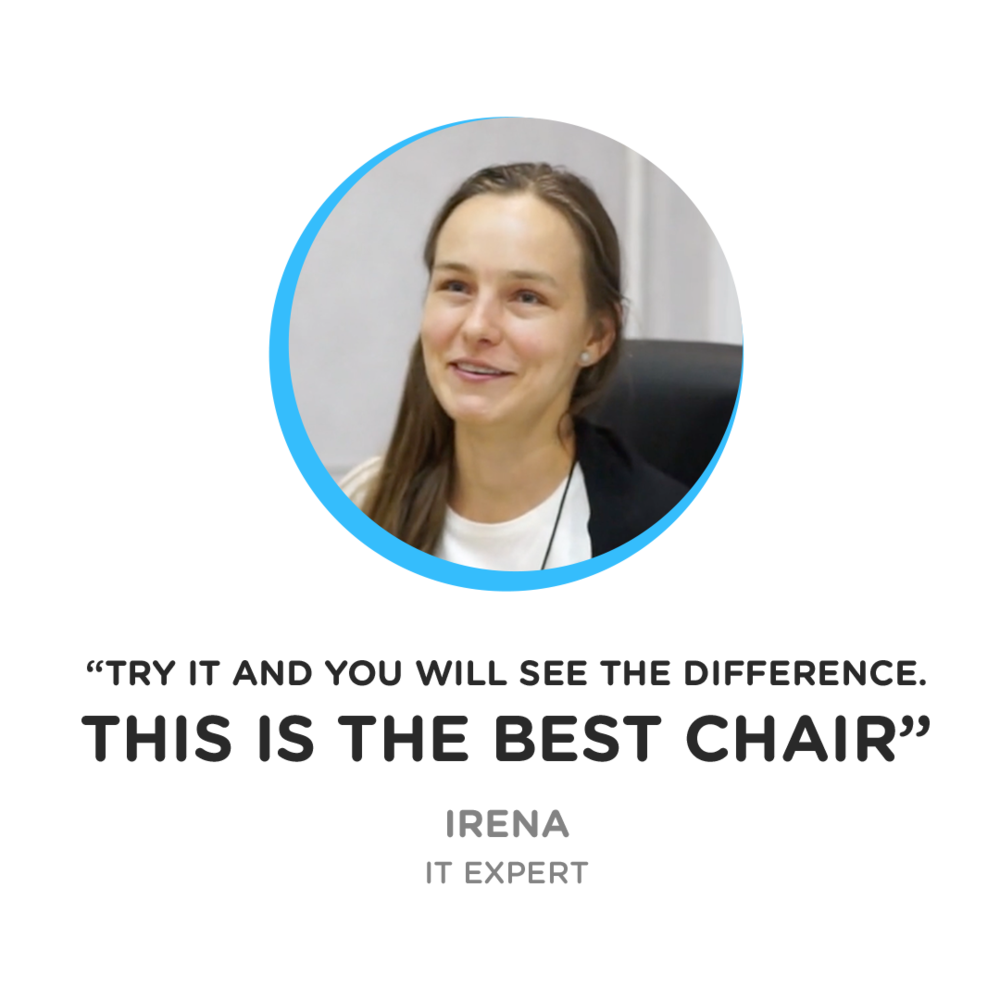 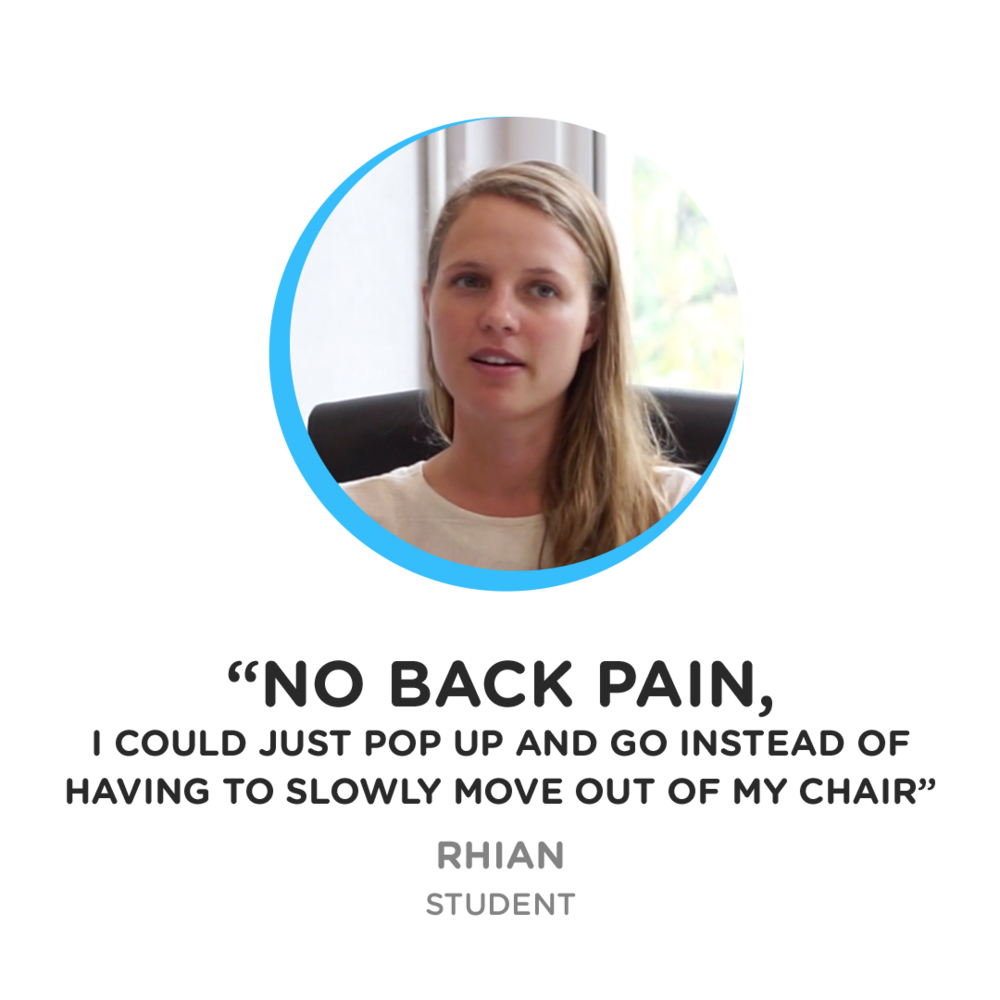 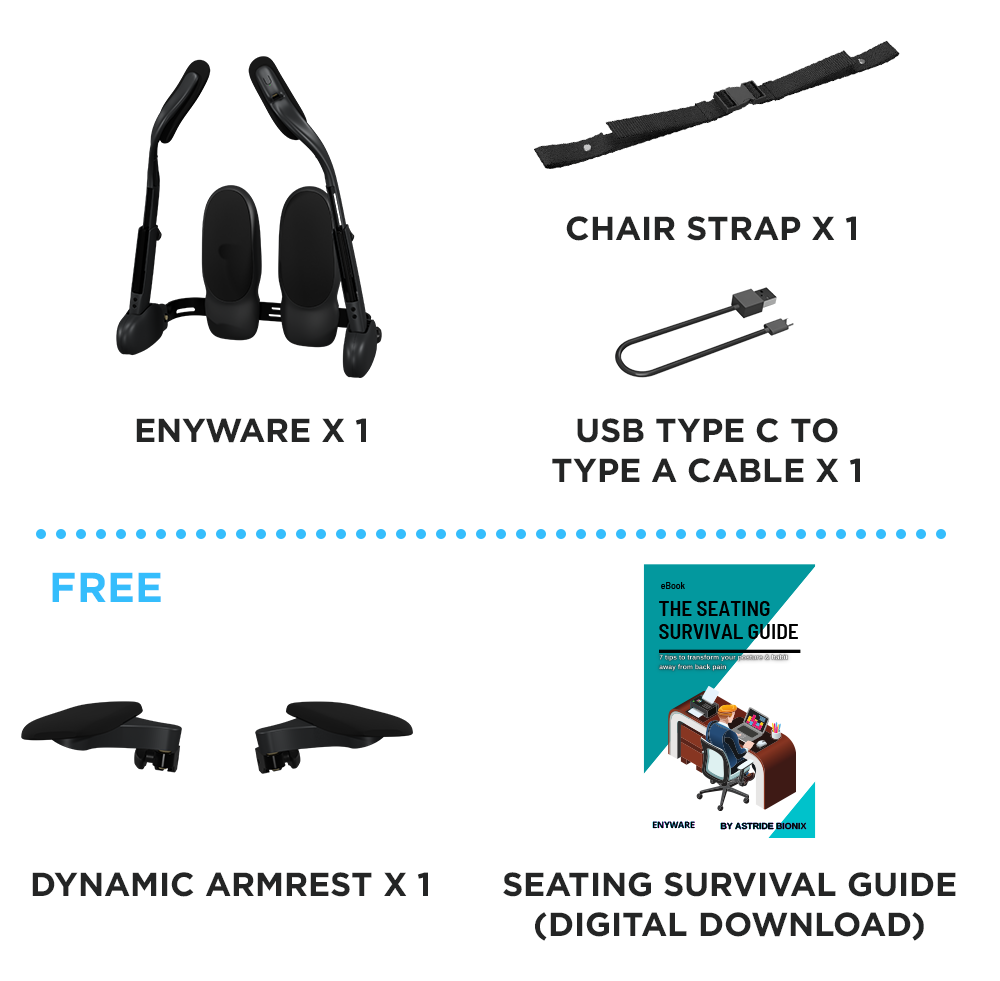 Pre-Order and get it today for

Guarantee money back within 30 days after receiving the product according to the conditions set by the company.

In exchange for pre-orders, that will be ready to ship in the month of June 2022, you will get these 3 bonuses for free!

Compatible with: IOS 12 and above, Andriod 9 and above

P.S. Posture affects how people perceive you. Just as someone with good posture sends nonverbal signals of energy, confidence, and health. Basically, we look and feel successful!

The Most Important Body Language Signal For Success

In Production For 100% Delivery! 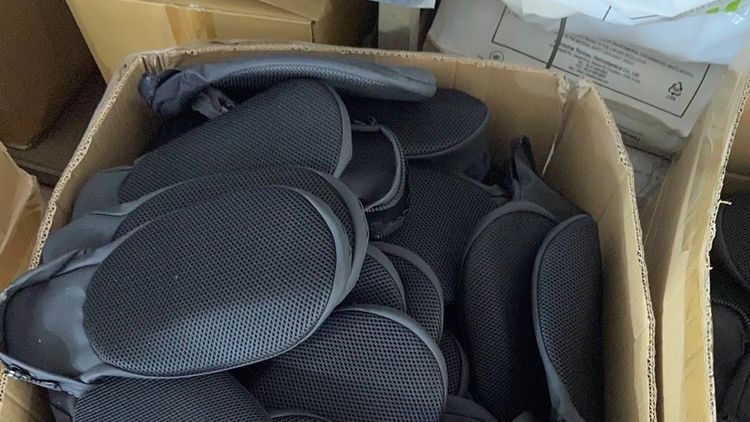 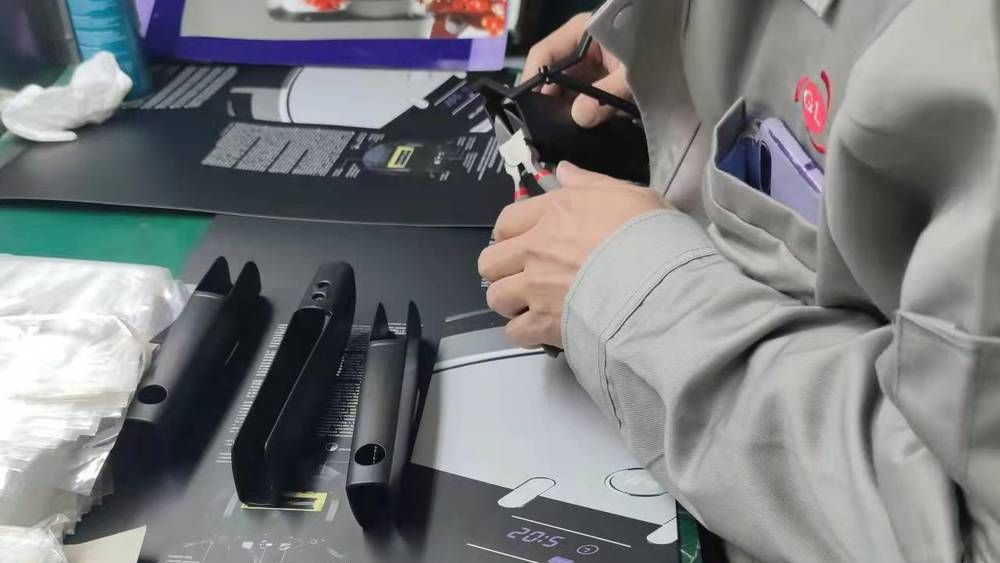 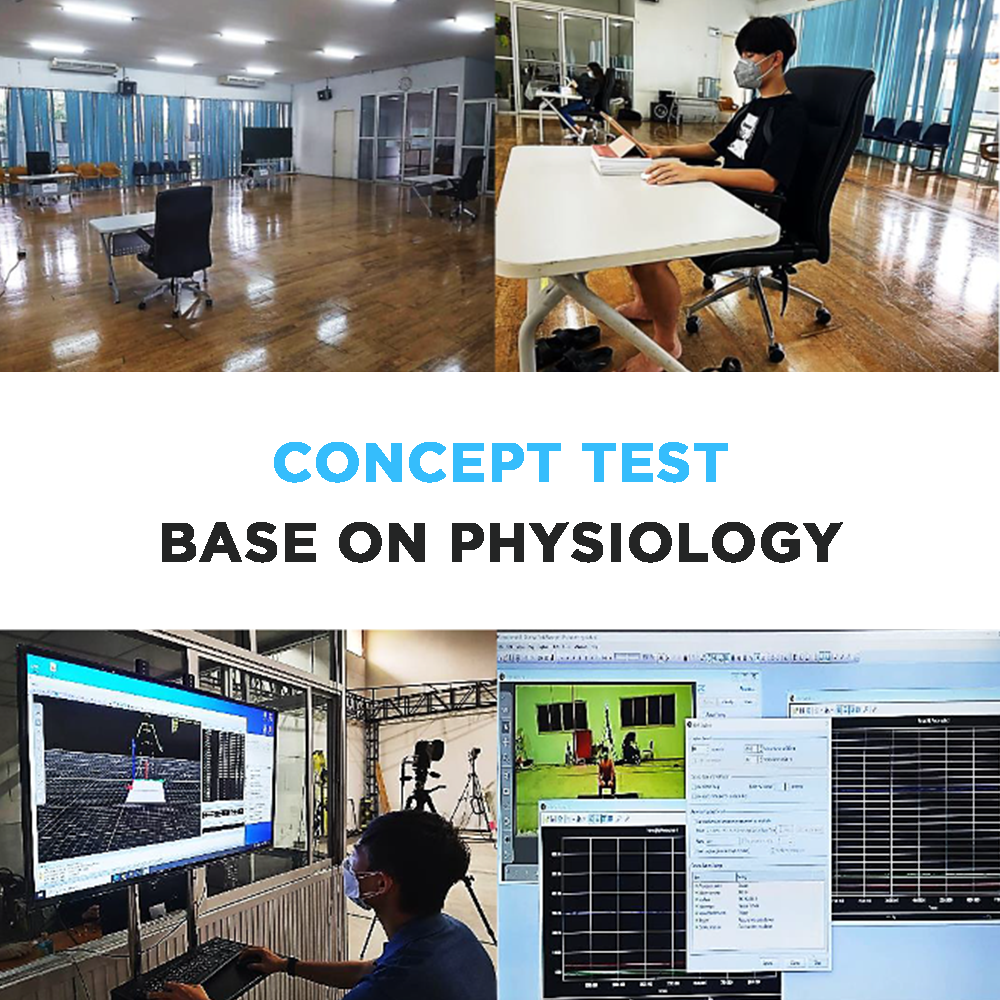 To ensure that Enyware has precise results, we ran a test with people using Enyware while doing activities that mimic everyday tasks, such as typing on a laptop.

With each day taking 4 hours for 4 weeks, the result is a significant symmetrical posture adjustment. It was apparent that earlier, the right side of the shoulder area was tilted more than the left side. But after using Enyware, both of the sides were straightened back evenly.

It was also reported that 90% of the users were acclimated to sitting up straight, even when sitting on any chair.

1. Does Enyware sit under the armpit and make sitting uncomfortable?

3. Will Enyware make you bend your neck more?

The front bar of Enyware’s StableSpine mechanic is bendable to the front, as you lower your head, your body will follow with the mentioned front stem. As you lower your head, the greater resistance you feel will remind you to get back to an upright position. However, if you’re still slouching, Enyware will notify you after 15 secs in order to keep you seated upright.

4. Will Enyware cause muscle weakness?

Enyware only aligns your posture into an ideal sitting posture, your back muscle is still doing its work but in its naturally-intended alignment.If anything else, it will strengthen our muscles in the right way!